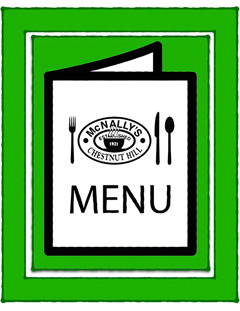 In 1921, Rose McNally opened "McNally's Quick Lunch" in a small corrugated steel building at the trolley turn atop the highest hill in Philadelphia. At this northern end of the world's longest trolley line, Route 23, Rose provided a hospitable respite to Philadelphia Rapid Transit workers including her husband Hugh. Being one of the few establishments where working men were welcome at the time in the privileged neighborhood, word of her simple but delicious fare quickly spread among the chauffeurs and local estate workers.

In 1927 Rose and Hugh purchased one of the new buildings just across the street and moved the Quick Lunch. In 1934, after Prohibition and much family debate, the family obtained a license to sell beer & alcohol. In 1953, Rose's grandson, Hugh James, returned home from his tour as a Marine and helped his father Hugh Patrick at the bar for a few days. He never left. Today you'll find Rose's great-granddaughters Anne & Meg running the store and offering the same generous hospitality and good food that McNally's is famous for.

This Philadelphia landmark is located at 8634 Germantown Avenue in the city's Chestnut Hill neighborhood. Look for the white-washed building with cedar shakes over a wide green door next to a bench under a single coach light. When it's lit you're in luck.

Inside you'll find a simple family-friendly pub. Dark, quiet and SMOKE-FREE since 1998. A perfect setting to savor your perfect pint. Authentic Guinness and a dozen more great beers that rotate regularly are on tap. Full bar service and bottles are also available.

Soups, salads, sandwiches and simple platters have been the recipe now for nearly 95 years. There's a Daily Special that includes a cup of soup; could be a fresh turkey wrap, sausage and peppers on a long Conshy roll or maybe even a quesadilla. Soups are scratch-made and there's a new choice each day. Expect fresh roasted turkey, beef and ham every day, crab cakes every Friday  and, of course, our famous Chicken Corn Chowder on the weekends. Meg's incredibly delicious cakes are available every day until they're gone but tomorrow there'll be more.

The Schmitter®, our one-of-a-kind sandwich that folks near and far crave is the culinary creation of Hugh James McNally. He pulled together the ingredients one night to make a meal for Dennis Krenich, aka Schmidter, because he only drank the local beer Schmidt's. Soon this serendipitous mix of flavors was being demanded by others. Touted by some over the years as a sure tonic for everything from hitting home runs to coaxing overdue newborns into the world and referred to in the Press (and now blogs) as "the ultimate cheese steak" and "the planet's greatest sandwich", this wee bit of genius from Hugh's flat-top has been served at McNally's for half a century now. The Schmitter® was called up to the big league in 2004 when the Phillies opened their new ballpark and the Eagles quickly drafted the local sandwich pick to perform at Lincoln Financial Field. In short order, the Schmitter® made it to Super Bowl XXXIX and then a few years later would play left field in two World Series. Big League indeed! The Schmitter® also travels and has been a guest at New York's Shea Stadium and many special events. But at heart it's still just a local on a local roll right here in Chestnut Hill.

Stop by soon and enjoy an Original!